Racing wheels are not cheap and it is easier to find the high-end choices than their alternatives but, worry not because PXN V9 Vs V900 are both ideal options for those who want to save a budget but still have some fun with a new setup. They are also perfect as a present for younger players or anyone who loves simulation racing games. If you wonder which to go for, let’s see below about what they can offer and which to buy. 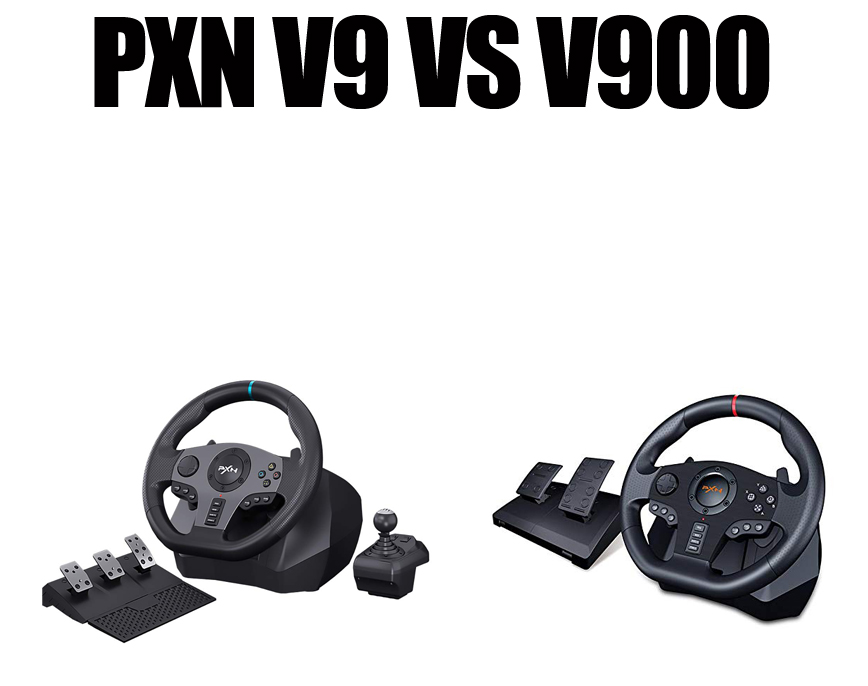 There are so many different games to play and there are also various gaming consoles or platforms to play your favorite games from. Many of us are probably more interested in something like a first point shooter or RPG or even a simple ball game on your handheld console. The options are almost unlimited and some of them are also free to play from your smartphone. For those who are into racing and cars, the driving or racing simulation game is a very fun game to play.

If you like something like Forza, we can add a steering wheel in your setup and as the name suggests, it is a very interesting way to improve your experience. The steering wheel is actually very simple as a controller to navigate your game but in a more natural way like how you drive a real car. Of course the feeling of each wheel and system will vary based on how they are designed for and the component or technology they have.

If this is your first time buying a steering wheel for a racing game, consider the styling that you want to have. Most of us like GT racing so a GT style will be the most popular as well and most options including alternatives such as PXN V9 Vs Logitech G29 are coming in this style. You can notice them from the features included on the wheel itself such as various buttons, paddles or clutch, as well as hub or hub adapter.

The F1 style on the other hand tends to have more buttons located or integrated on the grips while the rest including hub and adapter are on the back. Some people may prefer to buy the wheel only while the rest of us choose to have a complete system and the thing with racing wheel is they are almost the same to a controller meaning not every options will be compatible or easy to integrate to the main system; some of them are PlayStation and PC compatible while some can be more specific or universal.

In addition, each racing wheel comes in a setup with some features and usually they are either the wheel and pedals or wheel, pedals, and shifter. Options without shifters will be cheaper to buy if you are on a budget but some options do pack everything and are still reasonable to purchase. However, while it is always tempting to buy a cheap option, do note that they won’t be as great as something like Thrustmaster T300 RS or Logitech G923 Trueforce.

If you are here then we assume that this racing wheel needs to be fun to use and still friendly to the pocket. You may be playing simulation racing from time to time or just get interested in playing the game after seeing how fun it can be. For parents out there, it may be the time to buy your children a new toy for the holiday or birthday present and a racing wheel is a cool present. They don’t need to be expensive either since we can find plenty of good alternatives.

Logitech has the G29 and its Xbox version G920 on the entry level and affordable range but they are still quite expensive so if you need something less than $200, we recommend checking out the PXN collection. This company may not be as famous compared to the rest of the competition but their affordable options are not made for enthusiasts who want the highest level of experience either and more for those who just want to have some fun with their new controller. 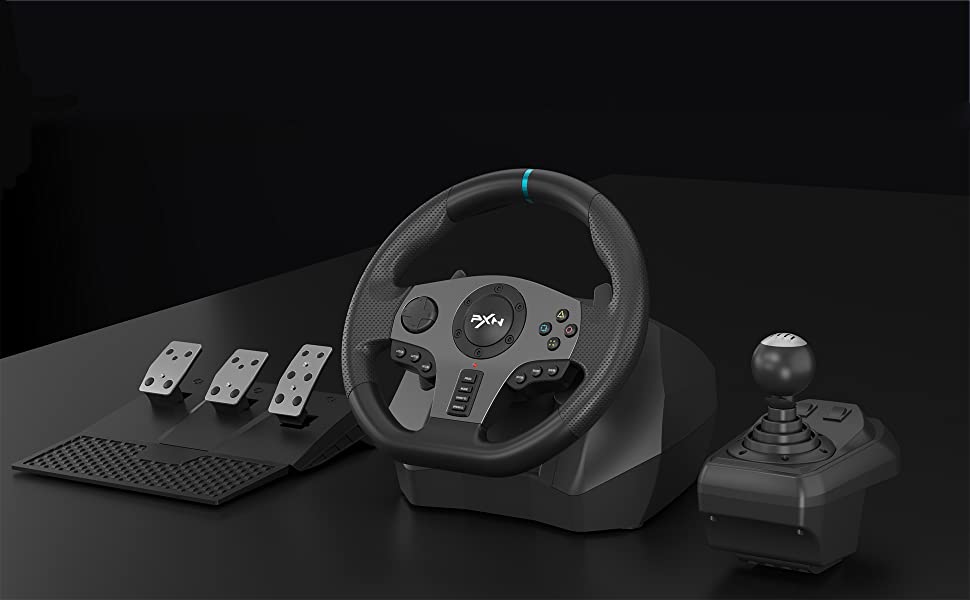 We have talked about the popular V9 in the previous comparison and now let’s see how it compares to the more affordable options V900. Both of them are pretty much the same in terms of technology so if you have used the V900 and want to buy another set V9, this will be a feel right at home experience. The comparison will be V900 being the less “complete” setup of V9 or shaved down version of the other and by adding the price gap you will get more as well.

One of our favorite things about PXN V9 and V900 is their compatibility because these systems are compatible with computers or consoles. They are going to improve your experience and are very fun to use as well but do note there is no software for computers so it can be a bit confusing to figure things out after plugging the console in. Additional features you can find on V9 are the shifter and clutch but even without these two your system will still work fine.

Before getting into what the PXN V9 and V900 can offer, let’s take a look into the unit first. As you can see, the wheel itself is pretty much the same and they are made mostly out of plastic. You can feel the material and grip being a bit stiff but it is not a huge issue. Some people may want to add padding or coating to improve the comfort. If you think the feel of these wheels will be like the one we have in a car.

It will be quite smaller in comparison with a diameter of only 11 inches. The wheels are narrower but probably perfect for young racers or children. The main wheel is where you will connect the shifter and pedal in and to secure it on a table, there are two clutches included that are quite huge actually. Since the V900 doesn’t include a clutch on its pedals panel, the dimension is also smaller.

Now for the most important part, let’s see what the PXN V9 and V900 can offer starting from the wheel itself. They are actually identical here and one of the best things is probably because you can turn them to 270 or 900 degrees depending on what you are playing. The buttons are also identical and they are pre-programmed which means the buttons are adjustable to what function you want to access; this is a bit of hassle sometimes but necessary for freedom of use.

On the features they have vibration to deliver the effect from your game. What’s lacking in terms of experience is the force feedback such as what you can get from the more expensive G29 and thus the feeling may not be as satisfying for some people. The game itself will be played like usual but the sense of immersion especially in handling performance will be affected with the lack of feedback, moreover if you have used a wheel with the feature before.

Next let’s see the pedals and while the PXN V9 and V900 have different setup here with a lack of clutch for V900, they function and feel similar to each other. For the system both wheels are featured with pressure-sensitive pedals. It may not be the same as a real car but it should work well. The feeling is kind of light when you wear thick shoes; it is very easy to press on them. The V9 is featured with a clutch however.

In comparison, it may give a more realistic sense or driving a real car but we can play with one as well. Additionally there is a folding base on the V9 pedal panel which is useful to gain the ideal angle and also slightly improves comfort.

The last part we want to talk about is their shifter but only the V9 comes with the feature and this is also one of the very few that comes with one in the $200 price range. It is working really well and is built really well that you can feel the similarity to the Logitech shifter which is more expensive. It comes with 6 speed meaning the driver can shift all the way to the 6th gear and can be set to reverse too by pressing the gear knob and pushing it to the 6th slot.

Both PXN V9 and V900 are very similar racing wheels with similar features but you get less from the latter with its lower cost. The V900 comes with everything the V9 is offering without the clutch pedal and shifter but they function just the same and are similarly fun to have. The performance is good with the lack of force feedback that may be a deal breaker for some people yet, if you are on a budget or just want to try simulation racing with a dedicated wheel any of the two should work awesome.

The decision is all yours and they are very affordable so we can’t complain as much. If you don’t have the budget restriction, we recommend getting the V9 for its additional features since it is nicer for the immersion.