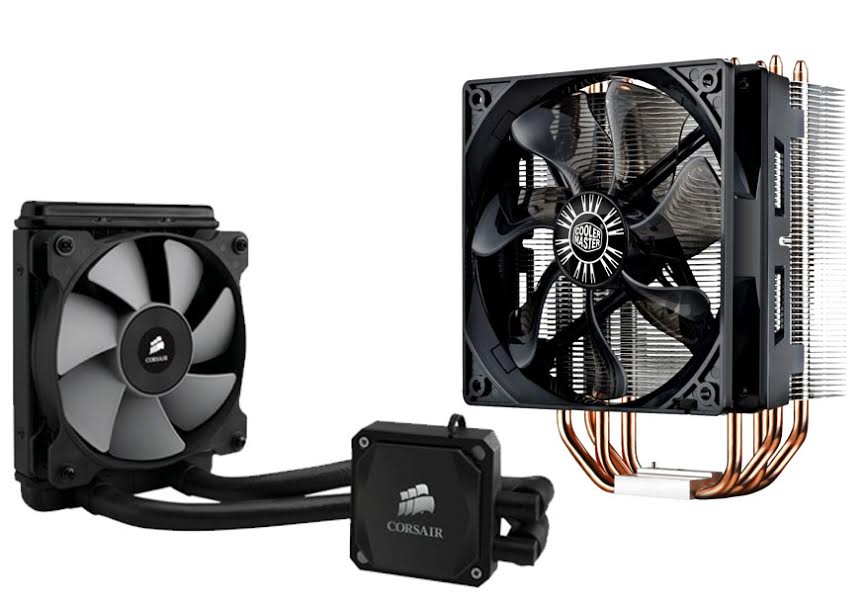 Dimensions
Let us start with the sizes. If your computer is rather small and compact, Corsair H60 may be more suitable. That is because Corsair H60 is smaller. It is compatible with most motherboards and CPUs, without anything to do with the size of the RAM. In fact, Corsair H60 does actually benefit from a smaller system, since it is a liquid cooler that needs pump away the heat-containing liquid as soon as possible. More on this later.

On the other hand, Hyper 212 Evo is significantly bigger. The towering fan requires a considerable amount of space around the CPU. Sometimes, it may not fit because RAM cards get in its way, requiring you to switch to low-profile RAM cards instead. (Have a look : Corsair H60 vs H100i)

Installation
Both models are easy to install. Even though Corsair H60 has more parts to be put, the magnetic multiplatform mounting bracket kit has helped tremendously in speeding up the process. On the other hand, Hyper 212 Evo has fewer parts to be put and connected, but don’t forget to screw the bolts properly.

Liquid versus Air
Now, it is the primary difference. Corsair H60 is a liquid cooler, whereas Hyper 212 Evo is an air fan cooler. Corsair H60 has a fan, too, that works with the flowing liquid that is pumped by the system. A liquid is much more effective in taking away heat. The liquid is pumped to the surface of the CPU to take the heat, then it is pumped again to release the heat outside and to be cooled back. Corsair H60 is very well-built, very unlikely to leak. Just make sure that you don’t mouth the radiator too far during the installation and accidentally break the system. Corsair H60 comes pre-filled without the needs of refilling or priming, so the system is very convenient to use.

Meanwhile, Hyper 212 Evo simply absorbs some heat to the metallic plates and blow a heavy air current to the processor to cool down the temperature. Performance-wise, the two are generally similar, though Corsair H60 is believed to be somewhat more effective when dealing with an overclocked CPU.