Both Corsair H45 vs MasterLiquid Lite 120 are among the most popular liquid coolers for gaming PCs. You need a capable cooling system in order to overclock your CPU without causing a blaze. These liquid coolers can do that, and they come at relatively affordable price points. Below, you can read more about the comparison and differences between the two.

What we will discuss in this article include:
– The dimensions of each system
– Which model that is easier and more practical to install
– The control features of Corsair H45 vs MasterLiquid Lite 120
– The comparison of their cooling performance and noise
– The warranty information for each liquid cooler
– Which liquid cooler that is generally better and more recommended

Dimensions
Just like Corsair H45 vs H55 that we discussed previously, Corsair H45 and MasterLiquid Lite 120 are AIO (all-in-one) liquid coolers. In other words, these products come with pre-packaged components that are ready for quick and simple installation. AIO liquid coolers have become very popular in the era of PC gaming nowadays because they are much easier to set-up than traditional liquid-based cooling systems.

Nevertheless, we should check the dimensions of Corsair H45 vs MasterLiquid Lite 120 to make sure that they can actually fit inside the available space in your PC case. This becomes even more important if your PC case is a slim and compact one.

Corsair H45 comes with a backplate which you need to install on the motherboard’s solder side if your socket is an Intel 115x type. Other Intel and AMD sockets can do with the original motherboard backplate. Then, you need to figure out the correct way to put the block on the CPU and install it with four spring-loaded screws. Finally, you can connect the radiator and the fan. Be careful with the elastic tubes, which may come into your way.

MasterLiquid Lite 120 follows a similar procedure. However, the tubes are not as elasticated as Corsair H45 tubes. As the effect, MasterLiquid Lite 120 feels easier to install, as the tubes won’t always get in your way and the radiator has a more compact size. You will find it easy to ensure that the block has sufficient contact with the processor, and that the mounting is strong and solid.

Control
In terms of control, Corsair H45 and MasterLiquid Lite 120 are similar. Both are PWM coolers. PWM, or pulse width modulation, is a method for a computer to control its fan speed. This method enables the computer to adjust the cooling power dynamically according to the current workload and temperature, so the fan won’t run at full speed all the time.

Not all cooling systems in the market support PWM. Some products still rely on a basic 5V, 7V, or 12V voltage and always run at full power. PWM coolers like Corsair H45 and MasterLiquid Lite 120 are often preferred because they are far more efficient – not to mention that they won’t produce buzzing noise constantly. 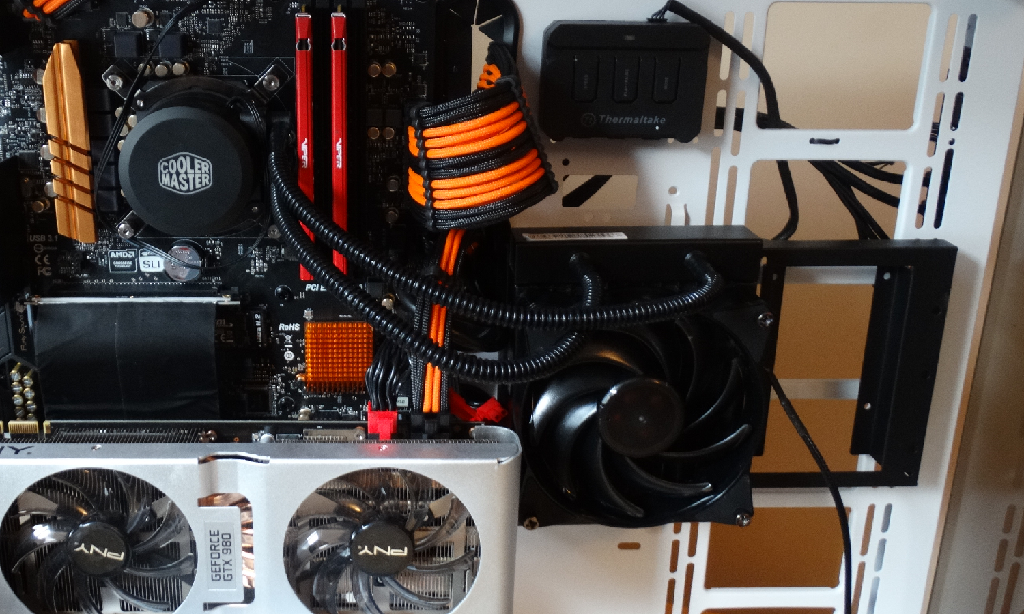 Of course, the higher cooling power is still beneficial. It gives you some safe space on the ceiling, so that the CPU won’t immediately hit the limit when doing heavy work. This is just to say that MasterLiquid Lite 120 is also a capable liquid cooler that will allow you to achieve a nice overclock performance.

Noise
Nobody likes a loud cooling system. It is really annoying to hear a buzzing noise in the middle of intense gaming. Some people are even worried that they are probably overworking their CPUs too much when they hear loud fan noise. You will be surprised by how a quiet cooling system can make your gaming experience a lot more enjoyable.

Corsair H45 is indeed a powerful liquid cooler, but it can be pretty loud. The maximum noise level is rated at 31 dBA. To be fair, this is nothing like the sound of a refrigerator or an electric shaver. But the fan noise is certainly noticeable.

MasterLiquid Lite 120 is a little bit more noisy. The maximum noise level is about 36 dBA. Not a dramatic increase, but still noticeably higher. Even so, it is still quieter than refrigerator or electric shaver noise.

Don’t forget that these are PWM coolers. Their fan speeds are adjusted dynamically, so you won’t hear the fan noise constantly. When not doing heavy work, Corsair H45 and MasterLiquid Lite 120 are completely silent. They only start to generate significant fan noise when your computer is doing heavy processing.

Warranty
Last but not least, let’s see the warranty information for each liquid cooler here. Nobody wants to get a damaged or defective product. A good warranty will ensure that you can get a replacement easily if you happen to get a bad product.

Corsair H45 is backed by a 5-year limited warranty, which is great. The company has been around for quite a long time, and they do provide good warranty service and customer support. The limited warranty covers all defects in the parts and build quality, but keep in mind that it won’t cover damage caused by improper installation or abuse.

MasterLiquid Lite 120 has a shorter limited warranty. It only goes for 2 years. The company is relatively newer, but they seem to provide good warranty service and customer support. That said, there are many users who say that this cooler won’t last long. The fan wears out quickly. You will need to start planning for a replacement after a year or so.

Conclusion
Between the two, Corsair H45 is more recommended. It has higher cooling power, so it is a bit better in keeping your CPU safe. It consistently keeps the processor temperatures lower. Also, the fan noise is relatively lower. Corsair H45 seems to be able to last for a longer time, and is indeed backed by a longer warranty.